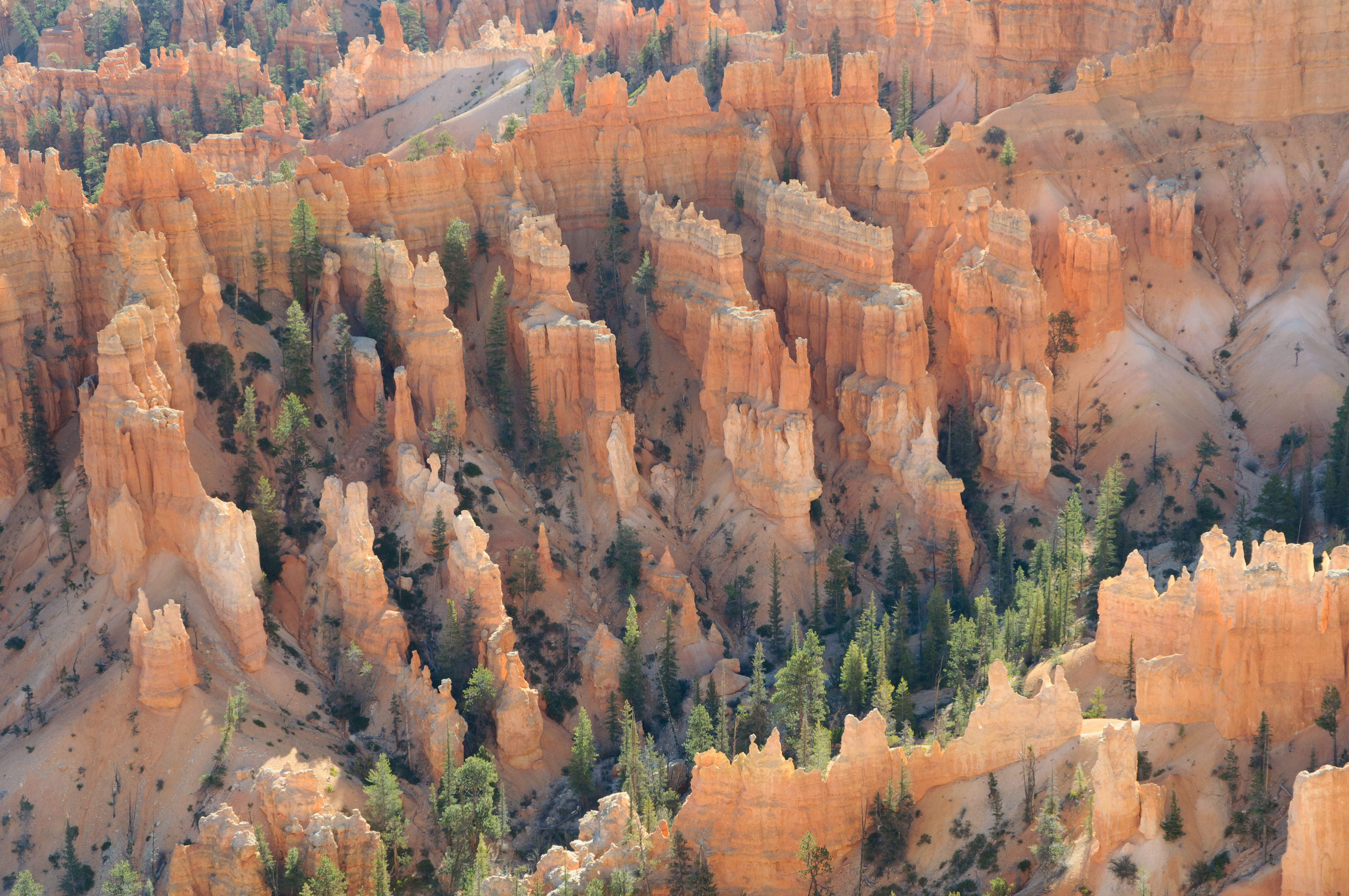 Throughout the world, there are many awe-inspiring structures that attract tourists from everywhere. From the Great Wall of China to the Pyramids of Giza, there are so many incredible things to be seen across the world. These structures and many others of interest, however, were manmade. While that does not take away from their beauty, it does make one wonder what kind of beauty Mother Nature herself could create if left to her own devices.
The answer to this question can be found in an unlikely place. Utah is home to some of the most impressive natural formations in the world. These structures have not been touched by man, yet seem to defy the laws of nature with their enormous size, unique shapes, and incredible diversity. Of the many rock formations in existence, hoodoos are perhaps the most curious, beautiful, and gravity-defying. They grace only a few small areas on this earth, but their aesthetic impact is immense. Those who want to experience the awesome power of nature should look no further than a beautiful hoodoo.
Some important information to know about hoodoos are what they are, how they’re formed, where they are found, and which ones are famous. The following is an answer to these important questions and more. Learning about hoodoos is sure to make everyone anxious to get to their nearest hoodoo cluster.

What is a Hoodoo?

Hoodoos are an incredible and rare formation made over millions of years. They are often called fairy chimneys, tent rocks, or earth pyramids depending on where in the world they are. Though they may look like they were created by man, they are formed completely by nature. Hoodoos are one of the most jaw-dropping natural formations that exist in the world.
It’s hard to say exactly what a hoodoo looks like, since there are so many that greatly vary in size and shape. In general, a hoodoo is a spire made of rock and minerals that can range anywhere from five to one hundred and fifty feet tall. There are big, round hoodoos that look like boulders perched on kitchen stools, tall, thin spires that seem to go on forever, and rounded chimneys with large rocks sitting quietly on the top. These huge variations are part of what makes hoodoos so interesting.

How are they Formed?

While the look of a hoodoo may be incredible, more impressive still is the story of how they were formed. These amazing structures are millions of years in the making. Little by little, each hoodoo has been slowly carved out, leaving only the rock structure standing where much more land once stood.
Erosion is responsible for the creation of hoodoos. This means that, rather than being the result of deposits or buildup over many years, they are actually the result of things being taken away. Every hoodoo began as a larger land formation, like a plateau. As the years go by, this land formation is slowly chipped away. Rain, snow melt, and the wind all work on the land, taking away rock, silt, sand, and other debris slowly. The resulting formation is a tall spire with all the excess soft material washed away.
Since hoodoos began as large chunks of land, there is often a section of harder rock at the top, what used to be the upper layer of the land, and softer sediments make up the chimney. This hard rock at the top helps to protect the hoodoo from the elements, especially falling rain. It does this by directing the rainfall almost like an umbrella, so that rain does not drip down the spire. This is a big help in making the hoodoos stay intact longer.
Even with this protection from the rock, all the hoodoos currently in existence will eventually succumb to the elements. The very force that makes these incredible structures, erosion, will also be the director of their demise. Though they will hang around for the next few centuries, it is only a matter of time before these gorgeous hoodoos no longer grace the earth.

Why are they so special?

There are so many things that set hoodoos apart from every other natural formation on the earth. There are very few structures that look even remotely close to the look of a hoodoo. The closest looking structure, a pinnacle, is much thinner and does not have the signature rock mass perched above.
Another thing that sets hoodoos apart is their unique color. In every area where hoodoos are found, they will appear to be different colors. This is due to the variation of minerals that lie within the rock that forms the hoodoos. In one location, a hoodoo will be dark gray or black, while in another it may appear pink. Hoodoos are truly a unique natural wonder.

Where are hoodoos found?

Part of the reason that hoodoos are such a rare spectacle is that they are found in only one type of land area. They are found in arid drainage basins or badlands. These land areas are characterized by their soft sediments like clay, minimal vegetation, and high drainage density. Since very little of the earth is taken up by these land areas, hoodoos are an uncommon structure.
Hoodoos can be found in a few different areas throughout the world. There are hoodoos in parts of the southwestern United States, Turkey, Serbia, Canada, Taiwan, and some other locations. Luckily for those who live near or travel to the area, there is an entire national park that is full of hoodoos for visitors to enjoy, and this park is Bryce Canyon National Park in Utah.

There is a large concentration of hoodoos in Utah, particularly in Bryce Canyon National Park. These hoodoos hold minerals that make them appear to be a pinkish color, especially when the setting sun bounces off their surfaces. Bryce Canyon is famous for these beautifully colored structures. There are a few hoodoos, however, that stand out thanks to their unique sizes, shapes, and locations. Thor’s Hammer
Perhaps the most popular hoodoo in Bryce Canyon, Thor’s Hammer is truly a sight to see. It consists of a very tall spire which supports a large rock at the very top. This large rock closely resembles that of a hammerhead, which is where this distinctive hoodoo gets its name. It can be viewed from many different areas of the park. But the most popular place to see it is on the trail called Navajo Loop. It is a can’t-miss when in Bryce Canyon.

The Hunter
This hoodoo is another famous structure in Bryce Canyon. It can be seen at Agua Canyon, right next to a small hoodoo called The Rabbit. These structures were named long ago, before recent erosion changed the look of these hoodoos. So, while they may have once resembled a hunter gazing at a rabbit, it may take a bit of imagination to see that now. Even if the form is slightly less pronounced than it was years ago, The Hunter is an incredible hoodoo to see while in Bryce Canyon.

Queen Victoria
This is perhaps the most obvious hoodoo shape of all the hoodoos in Bryce Canyon. It does not take much imagination to see this regal figure perched upon the high rocks, overlooking the Queen’s Garden. This incredible hoodoo can be seen by taking the Queen’s Garden Trail, which is a relatively easy hike through Bryce Canyon. Seeing this hoodoo will be the highlight of a sightseeing trip through Bryce Canyon National Park.

It is a great idea for those traveling to Bryce Canyon to plan on seeing at least a few of the hoodoos in the area. Thor’s Hammer, The Hunter, and Queen Victoria are just a few of the incredible hoodoos. There are many other lesser known hoodoos that are just as beautiful.

It is no wonder these natural formations are the center of attention at Bryce Canyon. They have an incredible natural history, are quite rare, and are formed in all kinds of interesting shapes and sizes. The fact that these structures were formed over millions of years by natural forces makes them even more incredible.
Around every turn in the Bryce Canyon badlands, visitors will see amazing hoodoos. As they gaze upon them, they may imagine what each one is shaped like, kind of like geological cloud watching. The unique nature of these hoodoos makes a trip to Bryce Canyon National Park that much more special.